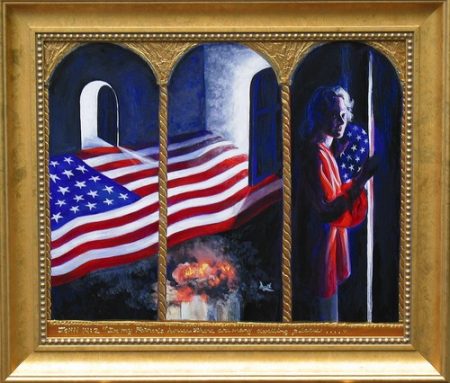 “In my Father’s house… are many rooms. If it were not so, would I have told you that I go to prepare a place for you?”

Heaven and Hell are the dominant images here. The American flag has become the floor of heaven. Hell below is the
nightmare of the exploding twin towers.

Christ descending into Hell has always baffled me. Why should Christ “descend into Hell” before entering Heaven? Here it is however, so strongly present in this Hell of a disaster.

“Nothing can separate us from the Love of God.” I framed this one with 3 arches. Subliminally, I think the Trinity, Father Son and Holy Ghost was on my mind.

Without the palpable Holy Spirit, I would not have the insight to understand “Father, Son and Holy Ghost.”

Viewers have mentioned the “Middle Eastern” influence of these paintings. Again, I think I have been very much influenced by the icons of the early Church.