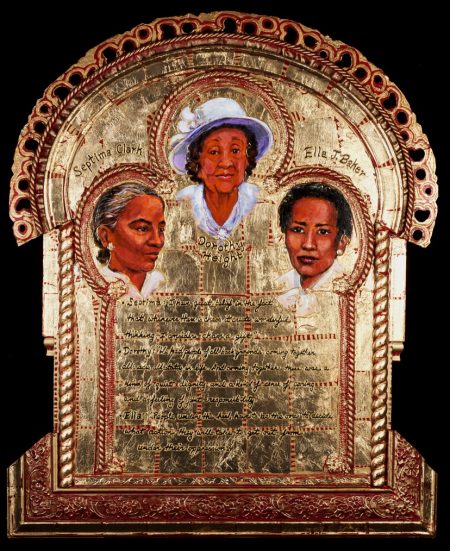 Women played a key role in the Civil Rights Movement, but only a few have been accorded public prominence. Dorothy Height, Septima Clark and Ella Baker are three who were tireless workers, but for whom history, were too often overlooked.

Septima Clark: Born May 3, 1898 in Charleston, S.C. to a father who had been a slave; her mother was raised in Haiti. After high school, Septima worked as a school teacher on John’s Island where she developed innovative methods to rapidly teach children and adults to read and write. She earned a BA from Columbia and a Master’s degree from Hampton Institute. Teaching in Charleston, she was told she must give up the NAACP; she refused, was fired and lost her pension after 40 years of employment. She was active with the Highlander Folk School in TN, where she promised “to turn sharecroppers into voters.” She is remembered for having established “Citizenship Schools” around the South. In addition to increasing literacy, the schools also taught students to act collectively and protest against racial discrimination. She was given a “Living Legacy Award” by President Carter in 1979. When she died on December 15, 1987, Rev. Joseph Lowery praised her work and her “pioneering efforts in citizenship education and interracial cooperation.”

Dorothy Height: Born March 24, 1912; she was raised in the steel mill area of Pittsburgh, PA. In 1932, despite discrimination, she graduated from NYU with a Master’s degree in educational psychology. She was employed as a caseworker for the NYC Welfare Department and began her civil rights activities when she joined the National Council of Negro Women. She served as president from 1957-1997. On the national staff of the YMCA, she developed leadership training and interracial educational programs. During the 1960’s she organized Wednesdays in Mississippi, bringing black and white women together from the North and South. First Lady Eleanor Roosevelt, Presidents Eisenhower and Johnson sought her counsel on inter- racial issues. She was seated on stage at the Inauguration of Barack Obama in 2009. She was awarded the Presidential Medal of Freedom in 1994 and the Congressional Gold Medal in 2004. At the age of 98, she died on April 20, 2010.

Ella Baker: Born on December 13, 1903. She grew up in rural N.C. where she heard stories of slavery from her grandmother who was a former slave. Graduating valedictorian from Shaw University in 1927, she moved to NYC. She became National Director of Young Negroes Cooperative League organized to develop black economic power. In 1938, she began a long association with the NAACP where she was outspoken about her belief in egalitarian ideals. Toward the end of the 1950’s she was interim Executive Director of the SCLC. She was a driving force behind the creation of the Student Nonviolent Coordinating Committee and a coordinator of the “freedom rides” in 1961. She was one of the founders of the Mississippi Freedom Democratic Party in 1964. Until her death on December 13, 1986 at the age of 83, she remained a civil rights activist, having worked along side W.E.B. Dubois, Thurgood Marshall, Martin Luther King, Jr, Stokely Carmichael and Rosa Parks.