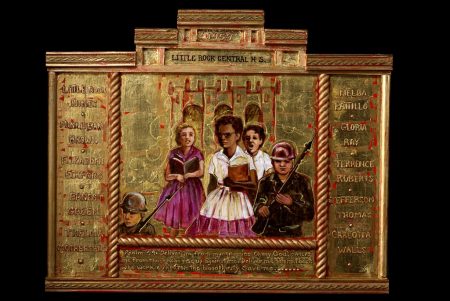 In 1954, the U.S. Supreme Court issued its historic Brown v. Board of Education. The decision declared that all laws establishing segregated schools were unconstitutional and called for the desegregation of all public schools throughout the United States. The NAACP began a campaign to register black students inpreviously all white public schools in cities throughout the South.

In Little Rock, Arkansas, the Board of Education agreed to comply with the Court’s ruling and established a plan for gradual integration of its schools. The plan would be implemented in September of 1957.The NAACP registered 9 black students chosen for their academic excellence. They would be attending the all-white Little Rock Central High School.In response to the School Board’s plan, several segregationist groups threatened to hold protests at Central High and, if necessary, to block the black students from entrance into the school.Governor Orville Faubus deployed the Arkansas National Guard to support the segregationists’ demands.The sight of the State National Guard lining the streets of the city to prevent the desegregation of the school was televised nationally and divided the city.

There were local religious organizations, however, which called upon the Governor to reverse his decision. Even President Dwight Eisenhower met with the Governor, warning him not to interfere with the Court’s decision. The Governor agreed to use the Guard to protect the 9 black students, but upon his return to Little Rock, he withdrew the National Guard leaving the students exposed to an angry white mob of parents and students who had gathered around the school in protest of integration.The Little Rock Nine were jeered and spit upon by their white classmates as they made their way toward the school. The crowd even beat several reporters and smashed school windows. By noon, police were forced to evacuate the black students from the school.

When the Governor did not restore order, President Eisenhower dispatched the 101st Airborne Division to Little Rock and placed the State National Guard under federal command. By afternoon, soldiers surrounded the school with fixed bayonets. Under federal protection, the Little Rock Nine attended Central High School that year. The next year, to avoid integration, Governor Faubus closed all the high schools in Arkansas. They were reopened in the fall of 1959 and despite more violence, 4 of the 9 returned, this time protected by local police.