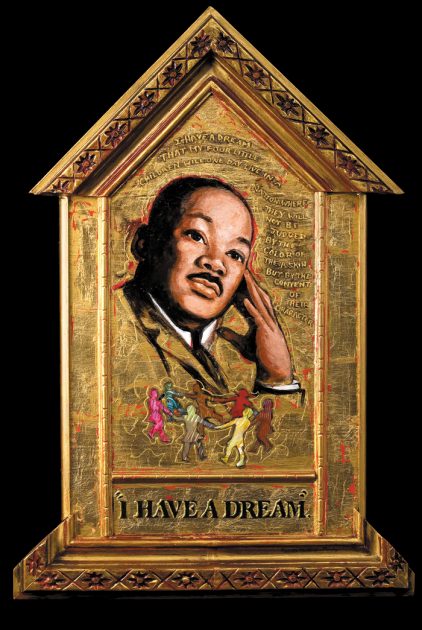 “I Have a Dream” is the popular name given to the historic public speech by Martin Luther King, Jr. at the conclusion of the March on Washington for Jobs and Freedom on August 23, 1963. Delivered in front of the Lincoln Memorial to a crowd of 250,000 people, it is considered to be one of the greatest and most notable speeches in American history.

According to U.S. Congressman, John Lewis, who also spoke that day as president of the Student Non-Violent Coordinating Committee, “Dr. King had the power, the ability and the capacity to transform those steps of the Lincoln Memorial into a modern day pulpit. By speaking the way he did, he educated, he inspired, he informed not just the people there, but people throughout America and unborn generations.”

The March on Washington and the “I Have a Dream” speech represented a defining moment in the Civil Rights Movement. After the integration of Central High by the Little Rock 9, sit-ins at lunch counters, the Freedom Rides through the South, the Montgomery bus boycott, the Mississippi Freedom Summer, the march from Selma to Montgomery, the largest civil rights demonstration, composed of blacks and whites as well as people of a variety of religious traditions, gathered around the reflecting pool in Washington, DC to push for civil rights and employment legislation.

The speech was televised across the nation and the cadence of its delivery and the power of its words addressed the conscience of the nation and solidified the Kennedy administration’s commitment to civil rights legislation. For the speech not only listed the injustices suffered by blacks in America, but held out a vision for an integrated and just society:

“So I say to you, my friends, that even though we must face the difficulties of today and tomorrow, I still have a dream… I have a dream that one day, down in Alabama… little black boys and black girls will be able to join hands with little white boys and white girls as sisters and brothers…”

He then concluded: “And when we allow freedom to ring, when we let it ring from every village and hamlet, from every state and city we will be able to speed up that day when all of God’s children — black men and white men, Jews and Gentiles, Catholics and Protestants — will be able to join hands and to sing in the words of the old Negro spiritual, ‘Free at last, free at last; thank God Almighty, we are free at last.’”