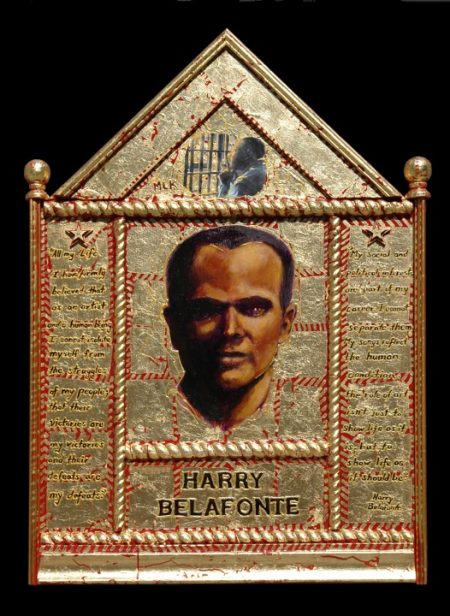 Harry Belafonte is a famous singer and film star. He is also dedicated to the struggle for civil rights. Despite the injustice of Jim Crow laws during the 1950’s, he was the first musician to have an album sell over 1,000,000 copies worldwide. Especially popular was The Banana Boat Song with its signature “Day-O” lyric. He became the first African-American to win an Emmy for his 1959 TV special, Tonight with Harry Belafonte. He starred in such ground breaking films as Carmen Jones (1954) and Island in the Sun (1957). He once noted:“My social and political interests are part of my career. I cannot separate them. My songs reflect the human condition. The role of art isn’t just to show life as it is, but as it should be…” Eventually his fame allowed him to contribute his time and resources to the Civil Rights Movement.

Harold G. Belafonte, Jr. was born into poverty on March 1, 1927 in Harlem, New York City. Harry’s famous calypso musical style is derived from his Caribbean roots. As a child, he spent eight years in Jamaica where he learned the culture and its musical rhythms. After returning to the United States, he joined the Navy, where he experienced the disparity between America’s ideals of freedom and equality and the way people of color were treated. Through conversations with fellow black servicemen, he learned about W.E.B. Dubois and other prominent African-American philosophers.

After the war, he began to sing in clubs in New York City and from the money he earned, studied drama alongside many aspiring actors. Sidney Poitier became one of his closest friends. His singing and acting soon earned him fame. Many times he turned down a lucrative contract because it stereotyped African-Americans in a negative way. Because “all my life I have firmly believed that as an artist and a human being I cannot isolate myself from the struggles of my people”, he began to participate in demonstrations and raise money for the cause of racial justice. During the Montgomery Bus Boycott in 1955, he and Martin Luther King, Jr. became trusted friends. After Dr. King’s arrest in Birmingham in 1963, Belafonte posted $50,000 bond for his release. He helped organize and raise money for the Freedom Rides, the Southern Christian Leadership Conference (SCLC) and donated large sums to the Student Non-Violent Coordinating Committee (SNCC). After Martin Luther King’s assassination, Belafonte served as executor of King’s estate. Coretta Scott King, in her autobiography, “whenever we got into trouble or tragedy struck, Harry has always come to our aid, his generous heart wide open.”

In recent years, Belafonte is known for his support of humanitarian causes. He has used his talent to raise money for the anti-apartheid cause in South Africa, relief efforts for Haiti, Rwanda and Ethiopia. In 1985, he helped to produce We Are the World, a multi-artist effort to raise money for Africa. While he admits that progress was made by the Civil Rights Movement, in his book, My Song, he asks: “Where are the inheritors? Where are the new, young activists shaking up the social order?” Yet he remains optimistic: “I still believe…that in the final analysis, along the way we shall be comforted by one another. This is my song.”