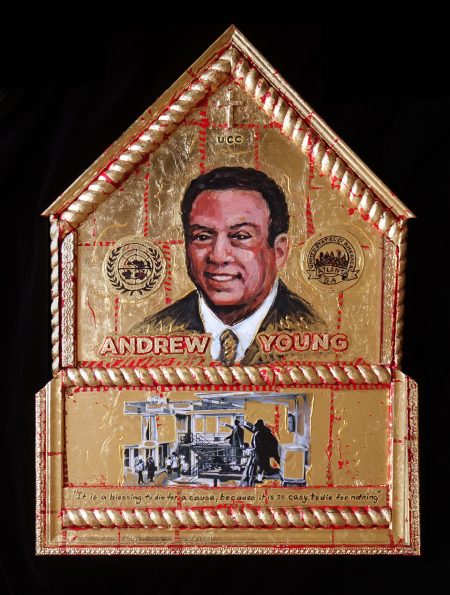 Andrew Young was born March 12, 1932 in New Orleans,. His mother was a teacher and his father was a dentist. Though middle class, they suffered  the stigma of segregation as did every black family in the South prior to the Civil Rights Movement.

After completing his undergraduate degree at Howard University, he enrolled at Hartford Theological Seminary in Connecticut, earning a divinity degree in 1955. Upon graduation, he was ordained in the Congregational Church (UCC). He served as a pastor of churches in Georgia where he met his first wife, Jean. He became interested in Gandhi’s methods of non-violent resistance for social change and  engaged in voting rights activities. In 1957 he and Jean moved to New York City while he worked for the National Council of Churches. In 1961, he moved back to Georgia where he joined the Southern Christian Leadership Conference. He continued his commitment to voter registration by participating in citizenship schools teaching rural blacks to read and how to mobilize politically. Through his energetic work for SCLC, he developed a close relationship with Martin Luther King, Jr . He became a trusted strategist and negotiator, helping to organize anti-segregation demonstrations in Selma, Birmingham and St Augustine. In 1964 he was named executive director of the SCLC which led him to assist in the writing of landmark legislation including the Civil Rights Act (1964) and the Voting Rights Act of 1965.  Later he would accompany Dr. King to Memphis where he went to court to gain permits for the Sanitation Workers demonstrations. On April 4, 1968, having just returned to the Lorraine Motel from a court appearance, he went to Dr. King’s room where the two playfully engaged in a pillow fight. Moments later King stepped onto the balcony where he was assassinated. Young was photographed on  the balcony with the body and other close associates pointing in the direction of the shooter.

In the early 1970’s Young began his political career believing he could initiate change from within  the political power structure rather than from the outside. Running for Congress he would say that “any movement for social change has to come in off the streets and enter politics” In 1972 he became the first African-American from Georgia elected to the US House of Representatives since Reconstruction. He left the House when Jimmy Carter, newly elected President of the United States, appointed Young to be the US Ambassador to the United Nations.  Following this diplomatic post, in 1981, he successfully ran for mayor of Atlanta which he served for two terms. He lost his bid in a run for the governor of Georgia, but shortly thereafter he was instrumental in bringing the Summer Olympic Games to Atlanta saying that he wanted to “show the public that Atlanta is a world-class city as well as a brave and beautiful city.”

After leaving politics, in 2003, he created the Andrew Young Foundation which supports and promotes health, education, leadership and human rights in Africa, the Caribbean and the United States. He has documented his years in the Civil Rights Movement in several books, including “A Way Out of No Way” and “Walk In My Shoes”. He is featured in the 2014 Hollywood film “Selma” which provided a new generation of young people the opportunity to learn of his influential role in the Civil Rights Movement. Additionally he has won a number of awards, including the Presidential Medal of Freedom, the NAACP Springarn Medal, and the John Lewis Lifetime Achievement Award.

Andrew Young and his wife Jean had four children. They were married for 40 years when she died of liver cancer in 1994.  In 1996 he married Carolyn McClain.  In 2020, he is among a select few of the many activists who were on the front line of the Civil Rights Movement.