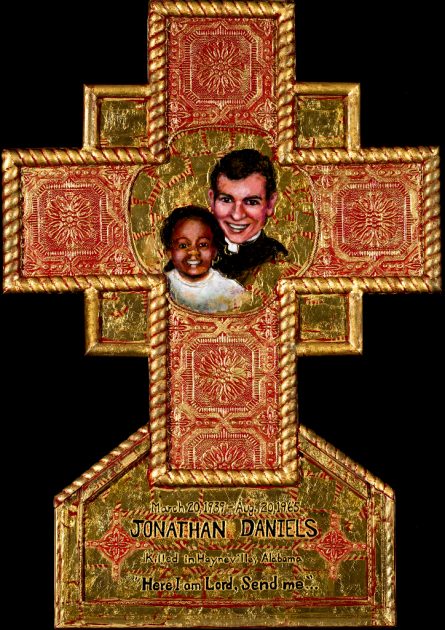 Jonathan Daniels was a white Episcopal seminarian who was killed while protecting a 16 year old black girl in Alabama during the Civil Rights Movement. His death helped to galvanize support for civil rights within the Episcopal Church.

Jonathan was born in Keene, NH, March 20, 1939. He graduated from Virginia Military Academy where, due to his father’s untimely death and a prolonged illness suffered by his sister, he began to question his religious faith. In the fall of 1961, he entered Harvard to study English literature. A year later, while attending an Easter service at the Church of the Advent in Boston, he felt a call to serve God and decided to pursue ordination in the Episcopal Church. He began studies for the priesthood at the Episcopal Theological School (now Episcopal Divinity School) in Cambridge, MA in 1963, expecting to graduate in 1966.

In March, 1965, Daniels responded to the call of Martin Luther King Jr. to participate with other clergy and students in the march from Selma to Montgomery. Convinced that he should continue to work for civil rights in Selma after the march, he was granted permission from ETS to remain in the South for the remainder of the semester and through the summer. He helped integrate a local Episcopal Church by taking young African-Americans with him to church each week. He also tutored students, registered voters and helped the impoverished apply for aid. In August, with 30 others, he picketed the “whites only” stores in the small town of Fort Deposit, Alabama. All the protesters were arrested. Five of the youngest were released the next day, but the others were held for six more days, each refusing bail unless all received bail. On August 20, all were unexpectedly released from the Hayneville jail. The group stood by the side of road trying to figure out how to arrange transportation back to Fort Deposit. Daniels, with three others, two blacks and a white Catholic priest, walked down the street to buy cold drinks at Varner’s Grocery Store, one of the few stores that would serve non-whites. Tom Coleman, a highway department employee, met them in front of the store wielding a shotgun. He threatened the group and aimed the gun at Ruby Sales, a 16 year old SNCC volunteer. Daniels pushed her out of the way as the shot was fired. He was killed instantly by the blast. The priest, Richard Morrisroe, grabbed the other protester and ran. He was shot in the back and suffered debilitating wounds.

Coleman was acquitted of manslaughter charges by an all white jury on the grounds of self-defense. The Attorney General of Alabama, Richmond Flowers, described the verdict as “the democratic process going down the drain of bigotry and improper law enforcement.” Coleman died at age 86 in 1997 never facing any further charges. Dr. Martin Luther King, Jr. and Jonathan Daniels are the only 20th Century “martyrs” listed in the Anglican Book of Martyrs in Canterbury Cathedral. An elementary school in his hometown of Keene, NH. is named after him for his courage and commitment.