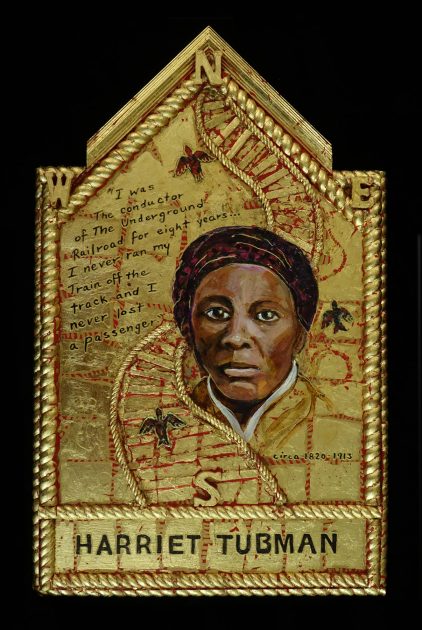 Harriet Tubman was a true icon of freedom as she guided hundreds of men, women and children out of slavery in the antebellum South on the Underground Railroad. Only five feet tall, she was a woman of immense courage and strength because as a runaway slave herself she risked being captured and returned to plantation life following the enactment of the Fugitive Slave law in 1850.

She was born into slavery in Maryland (1819-1823?) with the name Araminta Ross.  “Minty” (as her mother nicknamed her) was harshly treated by her owners. Though by 1835 about half the African-American population along Maryland’s eastern seaboard was free, she saw three of her eight siblings sold to distant plantation owners. For her entire life she carried the scars from frequent whippings. As a teenager, she suffered a severe injury when an overseer threw a heavy metal weight intending to hit another slave but striking her head instead. From then on she would have severe headaches and difficulties sleeping. The blow to her head also caused her to have visions and dreams which she considered signs from God. She was a devout Christian and it was her strong faith which gave her the courage to risk her life guiding slaves to freedom.

Before escaping slavery by fleeing to Philadelphia in 1849, she adopted her mother’s name of Harriet. When she married John Tubman in 1844, she took his last name as her own. Barely had she settled in Philadelphia when she returned to Maryland using the Underground Railroad as a means to rescue members of  her family. The Underground Railroad was a secretive and informal network of escape routes out of the South to the North and later, after the Fugitive Slave Law, to Canada. A few routes went to Mexico and the Caribbean. Railroad language was used as a secret code by “agents”, “station masters”, “conductors”. Stations were secret hideouts such as cellars, attics, compartments in closets. Harriet Tubman was known as the most effective and successful “conductor” as she guided some 300 slaves to freedom and never were any of her “passengers” captured during their escape. She used many disguises to avoid capture, dressing as a man, an old woman or a free middle class black woman. The last couple she conducted on the route to freedom had an infant whom she drugged with paregoric to prevent its crying from alerting the authorities.

During the Civil War, Harriet Tubman worked as a nurse, a cook, an armed scout and a spy.  She was the first woman to lead an armed raid at Combahee Ferry, which resulted in the freeing of 700 slaves. After the War, she claimed that the US Government owed her back pay for her work as a spy. It took over 30 years for her to receive her Civil War veteran’s pension.  Once  Emancipation was ratified  in 1865, Harriet became a staunch advocate for women’s suffrage and delivered speeches on behalf of women’s rights throughout the Northeast.

When Harriet was in her late 50’s she married again, this time to Nelson Davis, a man 22 years her junior. Their marriage lasted until his death 20 years later. Together they adopted a little girl named Gertie. They retired to a home she had bought in Auburn, NY  . She remained illiterate for her entire life, but she dictated her autobiography: Scenes in the Life of Harriet Tubman.  The head  injury she sustained as a girl caused her increasing pain. She went  to Boston’s Massachusetts General Hospital for brain surgery. She refused to be anesthetized, insisting that she “bite a bullet” as Civil War soldiers had done when their legs were amputated. Shortly before she died of pneumonia in 1913 she donated her house to the Zion AME Church in Auburn to be used as “a home for aged and indigent colored people”. She was buried with military honors at the Fort Hill Cemetery in Auburn.