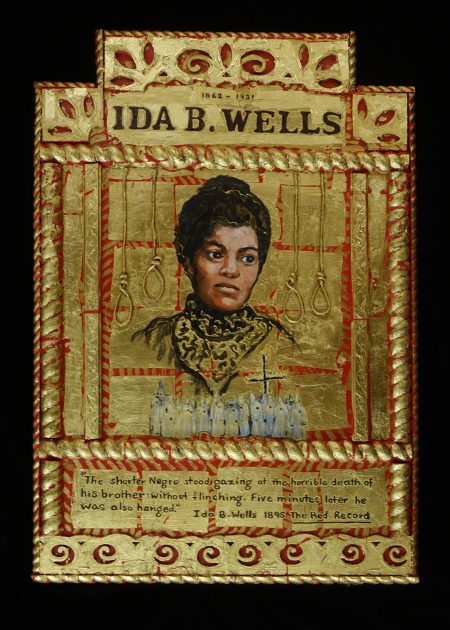 Ida Bell Wells was born a slave on July 16, 1862 in Holly Springs, Mississippi. After slavery ended, her parents became politically active in Reconstruction Era politics. Her father, James, worked with the Freedman’s Aid Society and served on the first board of trustees of Shaw University, a school for newly freed slaves, which he helped to start. It was at Shaw that Ida received her early education.

At the age of 16, both her mother and father and her infant brother died of yellow fever.  She left school to take care of her other siblings. She convinced a school administrator that she was 18 in order to become a teacher to support her family. By the time she was 20, she had moved to Memphis to live with her aunt. She continued her education at Fisk University in Nashville. Though her parents had instilled in her the value of education and modeled the importance of political activism, it was a train ride in 1884 that focused the rest of her life. Having bought a 1st class ticket for a trip from Memphis to Nashville, she was ordered to move to the black car. She refused to move so was forcibly removed from the train. She sued the railroad and was awarded $500 by the circuit court. Later the ruling was over turned by the Tennessee Supreme Court. This injustice resulted in her decision to become a journalist.  She became the owner of the Memphis Free Speech newspaper where she investigated the causes of white violence against black men and criticized the segregated educational system.

At the age of 30, she began her anti-lynching crusade as both an investigative journalist and activist after a friend and two other black men were lynched for setting up a grocery store that drew business from the local white store. She wrote numerous articles decrying their unjust deaths and began a tour of the South to collect information about other lynchings. She was horrified to learn that after some lynchings the ears, fingers, toes and other body parts of the victims were distributed to bloodthirsty crowds as souvenirs. She published her findings in a pamphlet, A Red Record, and wrote editorials exposing the illegality and injustice of lynching. So enraged by her crusade, a mob attacked her newspaper office and destroyed her print shop. She happened to be in New York City at the time, but was threatened with death should she return to Memphis. She moved to Chicago where she joined other black activists in calling for a boycott of the 1893 World Columbia exhibition. She penned another pamphlet “The Reason Why the Colored American is Not in the Colombian Exhibition” contending that the “world’s fair” negatively portrayed both Africans and black Americans. Frederick Douglass, along with famed black lawyer, Ferdinand Barnett, helped to fund her effort. In 1895, she and Barnett married. They had four children and from then on she was known as Ida B. Wells-Barnett.

She managed to balance both family life with political activism. In 1898, she led an anti-lynching demonstration in Washington DC and called on President William McKinley to make reforms. She traveled abroad to inform the rest of the world about lynching in America. Back in the United States, she criticized the suffragette movement because it ignored the still common practice of lynching.  She was among the founding members of  the NAACP and through the National Equal Rights League, she worked for women’s rights, calling on President Woodrow Wilson to halt discriminatory hiring practices in the federal government.  Remembering her parents’ emphasis on the importance of education, she focused on urban reform in Chicago and created the first African-American kindergarten in her community.

Beginning her campaign for civil and women’s rights as a writer and editor, she lived out what she believed was the journalist’s role: “The way to right wrongs is to turn the light of truth upon them.” In spite of the danger she had so often faced with her speeches, writings, and protests, she died of natural causes on March 25th, 1931, leaving behind a legacy of social and political reform.