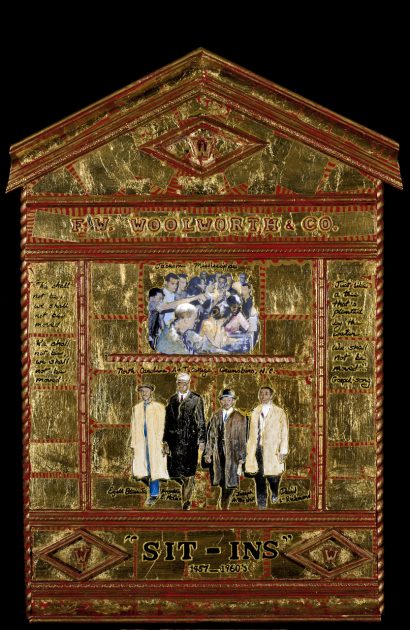 It was a pivotal moment in the Civil Rights Movement when, on February 1, 1960, four black students from North Carolina A&T University in Greensboro sat down at the whites-only lunch counter in the downtown Woolworth 5&10 variety store. When the waitress asked, “What do you boys want”, they politely replied, “We would like to be served.” The waitress reminded the students that “We don’t serve colored people here. There is a stand-up lunch counter over there.” “No thank you ma’am, we’d rather sit here.”

Franklin McCain, David Richmond, Ezell Blair and Joseph McNeil believed in “our hearts that racial segregation was evil.” They purchased school supplies in the store but, according to the Jim Crow laws of the state designed to keep whites and blacks separated in public places, they were not permitted to sit with whites in such places as theaters, restaurants or hotels. The students ordered coffee at 4:30 and remained at the lunch counter until 5:30 when the store closed. Remarkably they were not arrested. And so they returned the next day and were soon joined by other black students and even a few white students. Protesters from A&T, the neighboring black women’s Bennett College and other schools continued the sit-ins for six months. Finally in July, after $200,000 in lost business, Woolworth permitted blacks to be served at its lunch counter. It would take three more years of protest before all restaurants, movie theaters and other public facilities were integrated.

There had been sit-ins previously in other communities in the South, most notably in 1957 in Durham at the Royal Ice Cream shop. The Rev. Douglas Moore from the Asbury Temple Methodist Church and 6 others sat at “white only” booths at the Royal. When they refused to leave, they were arrested, charged and found guilty of trespassing. In 1958, the United States Supreme Court refused to hear their case.

However, two years later, the Greensboro protest sparked a series of sit-ins across the South. Just a week after Greensboro, sit-ins were organized in Durham and Winston. By February 9 they had spread to Charlotte. By month’s end, sit-ins were taking place in Fayetteville and Raleigh, in Nashville, TN and Hampton, VA. In the North, sympathetic black and white students picketed Woolworths and other similar chain stores. Committed to and trained in non-violence, many of the sit-ins were peaceful. But in some, students had lit cigarettes snuffed out on their heads or cream, catsup and sugar poured over them by whites resisting the collapse of Jim Crow. The pro-segregationist editor of the Richmond News Leader noted how politely behaved and well dressed the protesters were while their detractors looked and acted like a band of thugs.

According to long time civil rights activist, Julian Bond, Greensboro changed the course of the Civil Rights struggle because, “It injected a degree of activism which until then had been largely confined to activism in the courts. All of a sudden, activism in the streets became part of the weaponry that the movement used and that just changed everything.”