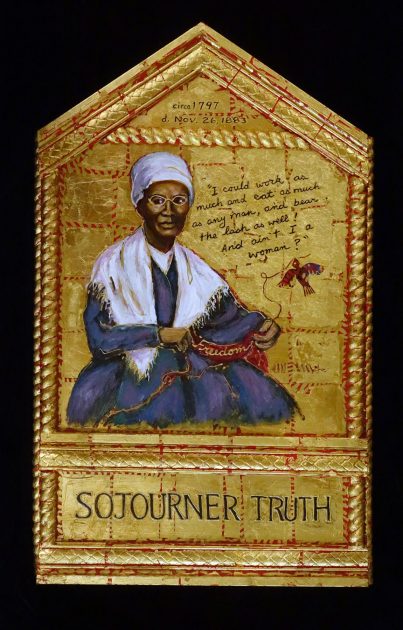 Sojourner Truth was an outspoken advocate for the abolition of slavery and a tireless crusader for voting rights for women. She was born into slavery in Dutch speaking Ulster County, New York with the name Isabella Baumfree in 1797. She changed her name to Sojourner Truth in 1843, convinced that she had been called by God to go out into the countryside “testifying to the hope that was within her.”

During the early years of her life, she was bought and sold four times in the hilly countryside about 95 miles north of New York City. She was brutally treated by her owners. At age 10, she was sold at auction with a flock of sheep for $100. When a young mother, she was promised her freedom in one year “if she could do well and be faithful”. When her owner, Thomas Dumont reneged on his pledge, in 1826 she fled with her infant daughter, Sophia, leaving her other children behind. She found her way to  the VanWagenen family in New Paltz who took them in. She worked for this family until the New York Emancipation Act took effect on July 4, 1827 and she became a free woman. When she sought to be reunited with her 5 year old son, Peter, she discovered that he had been illegally sold to a plantation in Alabama.  With the help of the VanWagenens, she went to court and got her son back. She became one of  the first black women who won a court case against a white man.

After her Christian conversion experience, Sojourner Truth left upstate New York and began preaching about the abolition of slavery.  In 1844, she joined  the Association of Education and Industry in Northampton, Massachusetts. This was a commune founded by abolitionists which supported women’s rights, religious freedom as well as pacificism. On 250 acres, the Association raised livestock, ran a sawmill and began a silk factory. Here Sojourner Truth met Frederick Douglass and William Lloyd Garrison. Unable to read or write, she dictated her memoir to a friend, Olive Gilbert and in 1850 Garrison published The Narrative of Sojourner Truth: a Northern Slave . That same year she bought a home in the village of Florence in Northampton with proceeds from the sale of her book.

In 1851 she attended the Ohio Women’s Rights Convention in Akron where she delivered her famous extemporaneous speech on women’s rights which later became known as “Ain’t I a Woman”  In it she she challenged the prevailing notions of racial and gender inferiority and inequality by pointing to her  physical strength (she was 6 feet tall) combined with her endurance as a former black female slave. The editor of a local newspaper took notes and published the speech a week later. But it was not until several years later when the speech was re-published in a Southern dialect which used the repetition of “and ain’t I a woman!”

During the Civil War Sojourner Truth helped recruit black troops for the Union Army.  She was employed by the National Freedman’s Relief Association in Washington DC where she worked to improve working conditions and educational opportunities for freed slaves. It was during this time she rode on streetcars and helped force the integration of public transportation. Her dedication and commitment earned her an invitation to meet President Abraham Lincoln in October of 1864.  After the War, she continued lecturing around the Northern states on women’s suffrage and the need for land grant legislation for former slaves. After meeting President Ulysses Grant, she campaigned for his re-election. When she tried to vote for him on election day, she was turned away at the polling place.

Following the War, she moved to Battle Creek, Michigan where she died in 1883. Today there are statues to her memory in Battle Creek, Florence, Massachusetts and  the University of California.