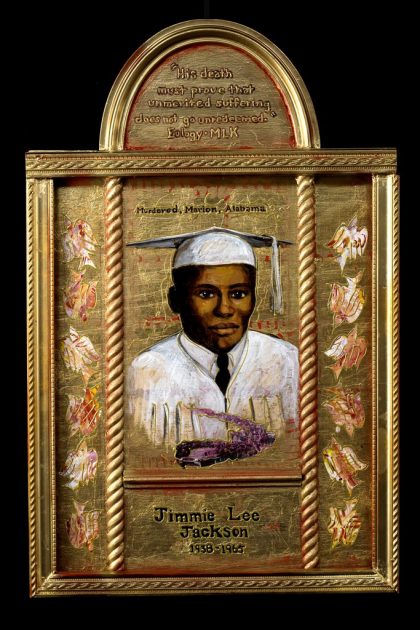 Jimmie Lee Jackson was born in Marion, Alabama in 1938. He was a farm laborer and a deacon in his Baptist Church. He was also one of the little known heroes of the Civil Rights movement.According to some, “without Jimmie Lee Jackson, there would not have been a march from Selma to Montgomery.”

In 1962, Jimmie Lee went with his mother and grandfather as they tried to register to vote. When Jimmie Lee saw his frail old grandfather rudely turned away from the registrar’s office, he knew then that he had to become involved in the effort to win voting rights for blacks.

On the night of February 18, 1965, about 200 marchers left the Zion Methodist Church and headed to the courthouse to protest the arrest of a civil rights worker and to demonstrate for their right to vote. Jimmie Lee’s mother, Viola, and his grandfather, Cager Lee, were among the marchers. They had walked only a block when they were confronted by a line of state troopers and the police chief who ordered them to disperse.The marchers stopped, a minister knelt to pray, and suddenly all of the street lights went out. The minister was clubbed on the head by a trooper. Other troopers began to swing their clubs and the marchers panicked, running to find cover wherever they could.

Jimmie and his mother ran into Mack’s Café for safety when they saw Cager stagger into the café beaten and bleeding. Jimmie tried to lead the old man out the door to get him medical attention, but they were shoved back into the room by club-swinging troopers. They began to beat at random those huddled inside. Jimmie Lee saw one trooper hit his mother and he lunged at the man. The trooper clubbed him across the face and knocked him to the floor. Another trooper shot Jimmie Lee in the stomach. As he fled the café, troopers beat him as he ran up the street until he fell to the ground.It was 2 hours before he was taken to the hospital in nearby Selma because he was first arrested and charged with assault and battery.He died in the Good Samaritan Hospital seven days later, on February 25. 1965.

The killing of Jimmie Lee Jackson was a pivotal event in the Civil Rights movement.Civil Rights leaders wanted to confront Gov. George Wallace with Jackson’s open coffin. Instead it was decided that there should be a massive march from Selma to Montgomery to protest Jimmie Lee’s death and to bring national publicity to the issue of voting rights.On March 7, 600 people assembled to begin the March. After being turned back in a violent confrontation with state troopers on Bloody Sunday, thousands of blacks and whites from around the nation joined Martin Luther King to begin the successful walk to Montgomery.Arm in arm with King was Cager Lee, Jimmie Lee Jackson’s grandfather.