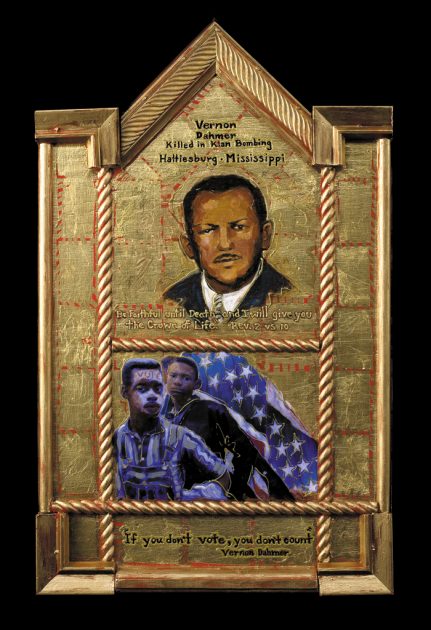 Vernon F. Dahmer was an African-American business man, chapter president of the NAACP, and a voting rights proponent. He died at 57 years of age when his house was bombed while he and his wife and 2 of their children were asleep inside.

Dahmer was born in 1908 and died January 10, 1966 on the “Kelly Settlement”, where he lived his entire life.His grandmother was the offspring of a white plantation owner and a black female slave. The owner willed the land to her descendents. The Dahmer family became prosperous. A successful businessman, Vernon owned a store, a sawmill and a 200 acre farm. He married a schoolteacher, Ellie Davis, and together they had 8 children. On the night that the Dahmer property was burned, 4 of their sons were serving overseas in the United States Armed Forces. The 2 youngest, Bettie and Dennis, were at home.

In addition to being a member of the business community, respected by both blacks and whites, he was the music director of his Baptist Church, a member of the NAACP, and a strong advocate for voting rights. He led voter registration drives in the community and a registration book was placed in his store so that his neighbors could register to vote.His mantra was, “If you don’t vote, you don’t count.”

After the Voting Rights Act was passed in 1965, a new sense of hope led more blacks to the polls. On January 9, 1966, Dahmer made a public offer to collect the poll taxes for his neighbors and on a radio broadcast said he would even pay the tax for those who couldn’t afford it. This announcement triggered an attack on the Dahmer home on the next night. Vernon and Ellie Dahmer awoke to the sound of gunshots and exploding firebombs. Vernon ran to the front door with his rifle and held off the attackers as Ellie and the children escaped by jumping out of windows at the rear of the house. The store along side of the house where an elderly aunt lived was also burned to the ground, but she was able to escape unharmed.Two cars filled with members of the Ku Klux Klan were seen to speed away. Vernon Dahmer’s 10 year old daughter had to be hospitalized with serious burns from which she recovered. But Vernon’s lungs were irreparably scorched and he died later in the day. From his hospital bed, he repeated his belief in the citizen’s right and need to vote: “I’ve been active in trying to get people to register to vote. People who don’t vote are deadbeats on the state…”

Those members of the Klan who had participated in this crime were brought to trial and punished. Sam Bowers, the KKK Imperial Wizard, who ordered the attack was finally found guilty in 1998 and sentenced to life in prison where he died in 2006.In a strange twist of justice, the cost of the trials and the outrage of the white community over this senseless murder broke the power of the KKK in Mississippi.