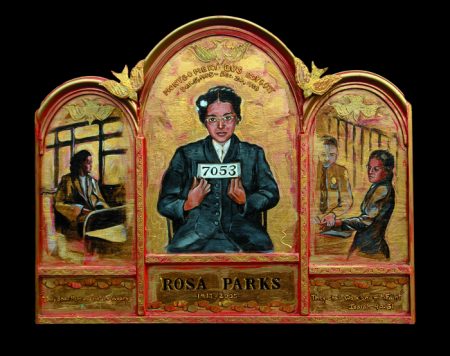 Rosa Parks (2/4/13 – 10/24/05) was a civil rights activist whom the U.S. Congress called “The Mother of the Modern-Day Civil Rights Movement”. It was on December 1, 1955 in Montgomery, Alabama when Mrs. Parks was arrested for violating the law by refusing to give up her seat on a public bus for a white man. This act of civil disobedience led to the Montgomery Bus Boycott and launched the Rev. Dr. Martin Luther King, Jr., who was active in the boycott, to prominence in the Civil Rights Movement.

Under Jim Crow laws, blacks and whites were segregated in virtually every aspect of daily life in the South. Buses and trains were segregated by enforcing seating policies which allocated sections for whites in the front and blacks in the rear. However, school bus transportation was unavailable for blacks in any part of the South. Black children had to walk to school. So, for Rosa, “The bus was among the first ways I realized that there was a black world and a white world.”

Mrs. Parks and her husband, Raymond, became active in the NAACP in Montgomery, Alabama and in 1943, she was elected secretary of the local chapter. Her civil rights activities were furthered when she attended the Highlander Folk School, an education center for workers’ rights and racial equality in the summer of 1955. Along with many others, Parks was deeply moved by the brutal slaying of Emmett Till in August of 1955.

For some time The Montgomery NAACP had sought a way to fight the segregated seating arrangements on the city buses. Since 1900, in Montgomery there had been a law guiding a “white” and “colored” seating arrangement, but by custom drivers adopted the practice of requiring blacks riders to move further back whenever there were not enough seats for whites.On December 1, 1955, Rosa Parks boarded the bus after a long day of work. As the bus began to fill, the driver demanded that 4 black persons move further back to make room for white passengers. Three of the persons moved, but Rosa Parks refused to get up. After a brief interchange, the driver said to her, “If you don’t stand up, I’m going to have to call the police and have you arrested.” She replied, “You may do that.”It has been noted by many commentators that Rosa Parks did not stand up because she was tired. Instead she has said: “The only tired I was, was the tired of giving in.”

In anticipation of her trial the following day, on Sunday December 4, word of a one day bus boycott was spread from church to church. The boycott on December 5 was so successful that the Montgomery Improvement Association was formed and the newly formed organization elected as its president a relatively unknown newcomer to town, the Rev. Martin L. King.In the end, the bus boycott lasted for 382 days. City buses stood idle for months, damaging the transit company’s finances, until the law requiring segregation on public buses was lifted.