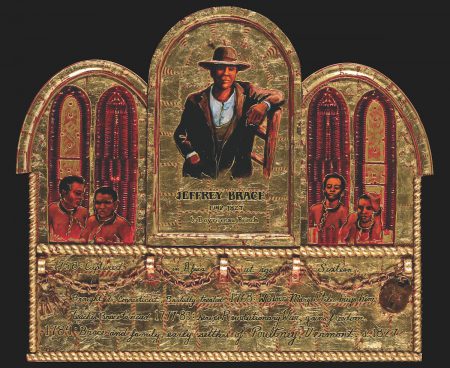 This icon was presented in 2011 to Green Mt. College, Poultney, Vt. as a gift, honoring this former slave who helped settle the town of Poultney in 1761.

Jeffrey Brace, born Boyrereau Brinch, was captured and enslaved in Africa at the age of 16. He was taken to Barbados and then New England. After being the slave of numerous cruel owners, he was sold to Widow Mary Stiles of Woodbury, Connecticut who treated him humanely and taught him to read. Baptized a Christian, he read and memorized the entire Bible. He became a powerful voice for the Abolitionist Movement in New England.

Serving in the Revolutionary War for five years, he was honorably discharged with a badge of merit and was granted his freedom. In 1777, Vermont was the first state to abolish slavery. Hearing “flattering accounts of the new state”, in 1784 Brace moved to Poultney, Vermont.  He and his family were among the first to settle this town. Here he bought land, and with his wife, Susannah Dublin, an African-born ex-slave and widow; they cleared and farmed the land.

Later, in 1802, Brace and his family, which now included 3 children, moved to Sheldon, in northern Vermont, where they bought 50 acres of land for $250.00

In 1810, after the aging Brace had become blind, he wrote his autobiography with the assistance of Benjamin Prentiss, a lawyer in northern Vermont. It was titled “The Blind African Slave”. The account is one of the very few “slave” narratives that has recorded the journey from capture in Africa, the Middle Passage across the Atlantic, and then finally to eventual freedom in America. Brace died in 1827.