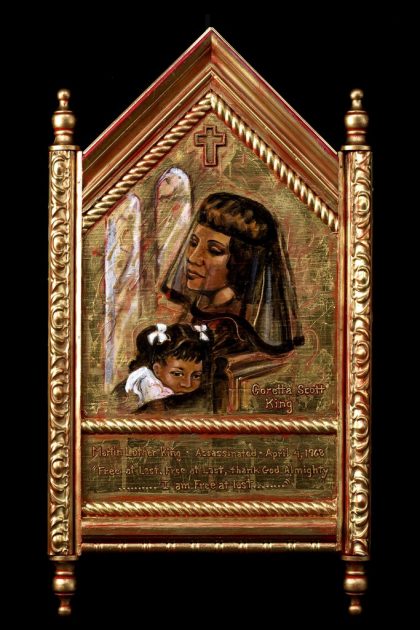 By the mid-1960’s some civil rights advocates were growing disenchanted with Martin Luther King’s philosophy of non-violence and tactics for social change. They were growing impatient with King’s emphasis on integration rather than on their new cry for “black power”.

He became an outspoken critic of the Viet Nam War which he articulated most explicitly in a sermon at Riverside Church in New York City on April 4, 1967 where this exponent of non-violence linked the War to civil rights: “We are taking the black young men who had been crippled by our society and sending them 8,000 miles away to guarantee liberties in southeast Asia which they had not found in southwest Georgia and East Harlem…”

He also expanded his vision to include the issues of employment and poverty.In the spring of 1968, in the midst of planning The Poor Peoples’ March on Washington, King went to Memphis, Tennessee to lend his moral authority to the efforts of striking sanitation workers. On the night of April 3, tired and feeling sick, he attempted to put off speaking to a rally of sanitation workers and sent his associate, the Rev. Ralph Abernathy instead. But the workers wanted King, so at the last minute he went and gave the last speech of his life. He was assassinated the next afternoon as he stood on the balcony of the Lorraine Motel.

The words of the speech encouraged the sanitation workers with the justice of their cause, but toward the end, using the prophetic language of Scripture, he spoke of his own journey as if he knew his life would soon be over:

“Well, I don’t know what will happen now.We’ve got some difficult days ahead. But it doesn’t matter with me now.Because I’ve been to the mountaintop…And I’ve looked over. And I’ve seen the Promised Land. I may not get there with you. But I want you to know tonight, that we, as a people will get to the Promised Land. And I’m happy tonight. I’m not worried about anything.I’m not fearing any man. Mine eyes have seen the glory of the coming of the Lord.”

James Earl Ray was arrested several days later and was convicted of murder. On the 9th of April, the funeral service for Martin Luther King was held in Atlanta at the Ebenezer Baptist Church. Lyndon B. Johnson, President of the United States, proclaimed a day of mourning with flags flown at half staff. On July 4, 1977, King was awarded the Presidential Medal of Freedom posthumously. Part of the citation reads: Honored by kings, he continued to his last days to strive for a world where the poorest and humblest among us could enjoy the fulfillment of the promises of our founding fathers. His life informed us. His dream sustains us yet.”