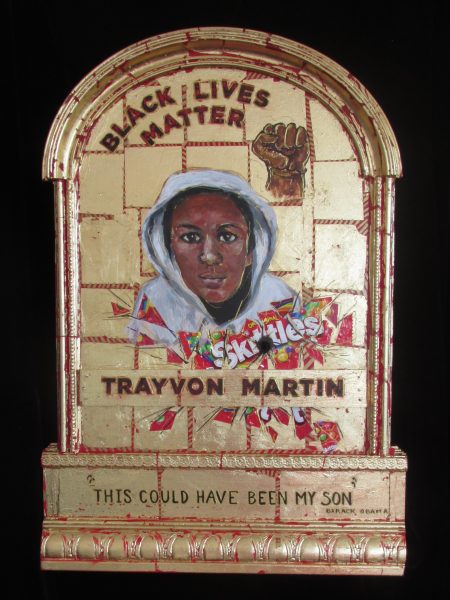 Trayvon Martin was an African-American high school senior when he was fatally shot by George Zimmerman, a volunteer neighborhood watchman. Trayvon’s death triggered a national controversy over racial profiling and was a factor in the rise of the Black Lives Matter movement.

On February 26, 2012, the 17 year old was returning to the condo where his father resided with his fiance in a gated townhouse community, The Retreat at Twin Lakes, located in Sanford, Florida. In a hooded sweatshirt and carrying a bag of Skittles and a bottle of juice he had just bought at a local convenience store, he was on his cell phone with his girlfriend. He told her he thought that he was being followed and began to run toward home.  George Zimmerman, a 28 year old volunteer captain of the neighborhood patrol, had indeed spotted Martin in his “hoodie” and thought he looked suspicious. He called the Sanford Police Department to report his concern, but ignored the dispatcher’s order not to follow the young man. Moments later gunfire was heard and when police arrived they found Trayvon dead. Zimmerman admitted to the shooting, but pointed to cuts on the back of his head and a bloody nose as evidence of a struggle. After questioning, he was released with no charges filed against him because of his claim that he shot the teen in self-defense.

Trayvon’s father learned of his son’s death when he called police to file a missing person’s report. Concerns were raised about the police investigation with questions of “racial profiling” since Trayvon had no criminal record and video from the 7/11 store where he had shopped showed no aggressive or criminal behavior.  There were also questions about Zimmerman’s behavior who, though he had a license to carry a gun, as a volunteer who regularly patrolled the streets of the condo community had often called police with warnings of people he deemed suspicious. Each call involved a black male.

News of Zimmerman’s release without charges created a national uproar. Demonstrations took place around the country calling attention to racial profiling and leading to the rise of  the Black Lives Matter movement. Even President Obama observed: “If I had a son, he’d look like Trayvon.”  A special prosecutor was appointed by the governor who found enough evidence to charge Zimmerman with second-degree murder. Over a year later, in July, 2013, the jury found Zimmerman not guilty. One of the factors in his acquittal was Florida’s “Stand Your Ground” law which allows the use of deadly force if a person feels threatened yet does not require them to retreat from a deadly situation even if it is possible for them to do so. Twice within the following two years, Zimmerman was arrested on charges of aggravated assault, one of which involved threatening his girlfriend with a rifle.

Though Trayvon Martin’s future was cut short, his death contributed to a growing awareness of the prevalence and danger of racial profiling. It also triggered The Black Lives Matter movement which has been calling attention to the increase in the shooting deaths of young black men by police.