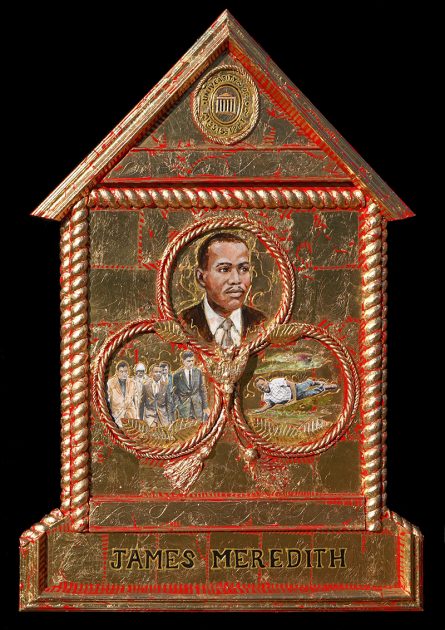 “Nobody handpicked me…I believe I have a Divine responsibility…”

James Meredith was born in Kosciusko, Mississippi on June 25, 1933 where he was raised on a farm with nine brothers and sisters. He attended local schools which were segregated under the state’s Jim Crow laws. An early experience of institutionalized racism shaped his thinking when he and his brother took a train from Chicago. As the train arrived in Memphis, he was ordered to give up his seat and move to the crowded black section where he had to stand for the rest of the trip home. At this point he decided to commit himself to equal rights for African-Americans.

After high school, he enlisted in the Air Force and served from 1951-1960. He attended Jackson State University for the next two years.  Since the Supreme Court had ruled in 1954 that segregated public education was unconstitutional and inspired by the newly elected President John Kennedy’s inaugural address, Meredith decided to enter the University of Mississippi. He wrote in his application that he wanted admission “for his country, race, family and myself”. On the application he wrote: “Nobody handpicked me…I believe I have a Divine responsibility. I am familiar with the probable difficulties involved….”

Perhaps he was not as “familiar with the probable difficulties” that would follow his application as he thought. He was accepted but when the registrar discovered his race, his admission was withdrawn. He filed a lawsuit alleging discrimination. When the district court ruled against him, the case went to the Supreme Court which ruled in his favor. In September of 1961, Meredith went to the University to register, but University officials and Governor Ross Barnett refused his entrance. Barnett called Meredith’s effort “our greatest crisis since the War Between the States”. It would fall to the federal government to guarantee Meredith’s right to become a student at Ole Miss. President Kennedy assigned John Doar, the Assistant Attorney General for Civil Rights, along with Chief US Marshal J.P. McShane and two other federal marshals to accompany Meredith, but three times they were stopped by politicians and troopers acting under orders of Governor Barnett. The President then ordered over 500 federal agents to enforce Meredith’s rights and to protect him from threats of being lynched. On October 1, 1961 James Meredith was allowed to register but riots ensued for several days. When the violence ended, 166 marshals had been wounded and two bystanders were dead. Meredith  remained under federal protection throughout his time as a student. He graduated in 1964.

On June 5th, 1966, Meredith began a solitary March Against Fear from Memphis, Tennessee to Jackson, Mississippi as a protest against racism. Shortly after beginning the march, he was shot by a sniper. Hearing of the assassination attempt, other civil rights activists, including Martin Luther King, Jr., Floyd McKissick and Stokely Carmichael, continued the march in Meredith’s name. When they reached Greenwood, Mississippi, Carmichael made his famous inflammatory speech invoking “Black Power”.  Having recovered from his wound in the hospital,  Meredith rejoined the March on the evening of June 25th  as the group was approaching the original goal of Jackson, Mississippi.

Later Meredith earned a degree in economics at the University of Ibadan in Nigeria and a law degree at Columbia University in New York City.  He married a second time after the unexpected death of his first wife with whom he had four children. Retired, he lives in Jackson, Mississippi.