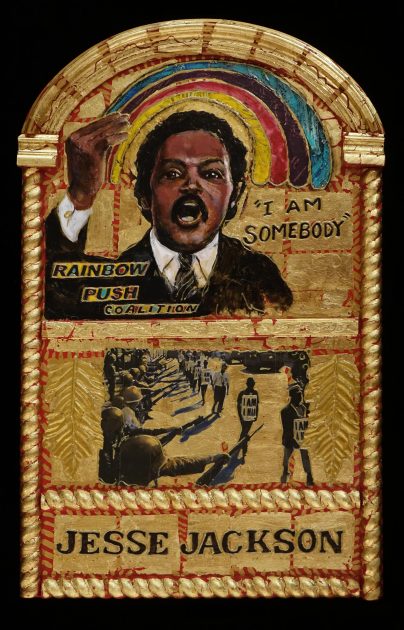 Jesse Jackson is a celebrated civil rights activist and Baptist minister, who twice ran for the Democratic party’s presidential nomination. He was one of Martin Luther King’s close associates and was with him at the Lorraine Motel the night of Dr. King’s assassination. Later he  founded two organizations that eventually were merged to form Rainbow/Push.

Born out of wedlock in Greenville, SC on October 8, 1941, a year later, his mother married Charles Henry Jackson who adopted him as his son. Throughout his life, Jesse liked to say he had two fathers as he claimed to have had a close relationship with both his biological and adoptive father. He was a good student and an outstanding athlete. After graduating from high school, he attended the University of Illinois on a football scholarship. In his sophomore year he transferred to North Carolina A&T State University in Greensboro where he became in involved in sit-ins and other civil rights demonstrations.

In 1964, he graduated from college with a degree in sociology and the following year went to Selma to march with Dr. King. He became an active worker in King’s civil rights organization, the Southern Christian Leadership Conference. In 1966, he moved with his wife and children to Chicago to do graduate work at Chicago Theological Seminary and was ordained as a Baptist minister. After leaving school, he went to work with Martin Luther King who was so impressed with his passion and drive that he appointed him director of Operation Breadbasket, the economic arm of the SCLC.

However, Jackson’s work with King and the SCLC was not always smooth. Although at first appreciative of the brash young man, many in the organization felt he was too independent and self serving. Just a few days before his murder, King became so frustrated with the young man’s constant interruptions, that King walked out of the meeting. He was, however, loyal to King and was with him when the shots rang out that killed him.  Jackson would say that King died in his arms on the motel balcony, but photos show that Jackson was not on the balcony but in the parking lot below. His claim seemed to many in  the SCLC as an exaggeration for his own gain. He was expelled from the SCLC.  He then returned to Chicago where he founded Operation PUSH (People United to Save Humanity) an organization which advocated for black self help. Later he organized the Rainbow Coalition whose mission was to promote equal rights for African-Americans, women and homosexuals. The vision was to include people of various ethnic, racial and sexual identities into one civil rights movement.

In addition to his organizational skills, he was a powerful orator. When speaking to black youth, he developed a back and forth rhythm of question and response: Who are you?  I AM!  Who are you? SOMEBODY! Who are you?  I AM SOMEBODY!  This refrain seemed to echo the words on the posters carried by the sanitation workers during the demonstrations in Memphis organized by Dr. King: “I AM A MAN”.  As his national profile increased, he began to travel to other countries, throwing his support behind an independent Palestinian state as well as becoming a strong advocate for the dismantling of apartheid in South Africa.

In 1984 and again in 1988 he ran for the presidential nomination of the Democratic party. Though he lost both times, he came in third in ’84 and second in ’88. In 1990, he was elected as a special “statehood” Senator representing Washington DC in its effort to become a state.  In 2000, President Clinton awarded him the Presidential Medal of Honor. When Barack Obama was elected the first African American US president, Jackson criticized him for “talking down to black people” for which he later apologized.

In 2017 Jesse Jackson was diagnosed with Parkinson’s Disease which has increasingly limited his public appearances and his political influence.