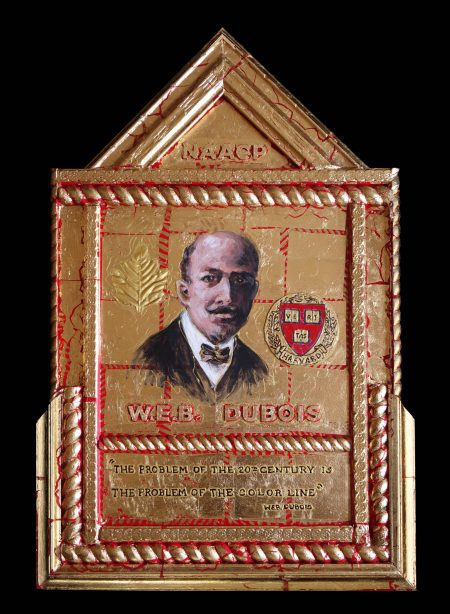 W.E.B. Dubois was born William Edward Burghardt DuBois on February 23, 1868 in Great Barrington, Massachusetts.  His father was an itinerant laborer, his mother a domestic worker. Two years after he was born, his father left the family. Raised by his mother, he spent his entire youth in that small New England town. Of the 4000 residents only a few were African American. The public school was integrated and he was encouraged to receive a college prep education. He was a brilliant student and even before graduation in 1884, he was writing articles for two regional newspapers.

He enrolled at Fisk University in Nashville, Tennessee, and it was here that he had his first encounter with segregation and racism as well as being immersed in the African-American culture of the South.  Following graduation from Fisk, he enrolled as an undergraduate at Harvard and earned his second BA there. The next year, with a fellowship from the Fund for the Education of Freedmen, he went to the University of Berlin for graduate work. Through his studies in Berlin and his extensive travels in Europe, he gained a new perspective on the role and power of race in American culture. After his return home, he began graduate studies at Harvard and was the first African-American to earn a PhD from Harvard.

He began his teaching career at Wilberforce University where he met a student, Nina Gomer, whom he married in 1896. Together they had two children. Though his Berlin thesis had been in economics, his work at Harvard in history, and literature and languages at Wilberforce, he was given the opportunity by the University of Pennsylvania to conduct a study of  the 7th Ward in Philadelphia. From this came a monumental book  in 1899, The Philadelphia Negro Problem, for which he used ground- breaking methods for doing sociological research. As a result of this work, he developed a theory of race as a concept and a call to action in defense of African-American identity and culture. He then had a long tenure at Atlanta University where he wrote  The Souls of Black Folks, one of his most pivotal and popular books.

As the 20th century dawned, with the rise of the KKK, the increase in lynchings and the enforcement of Jim Crow laws in the South, DuBois emerged as one of the most prominent black voices in America. He led opposition to the popularity of Booker T. Washington’s policy of political conservatism and racial accommodation. In 1904, DuBois joined with other opponents of Washington who were organizing for equal civil and voting rights through The Niagara Movement which eventually morphed into the NAACP. In 1910 DuBois moved from Atlanta to New York City as an officer in the NAACP and editor of its magazine CRISIS. Through his articles in CRISIS he wrote scathing articles attacking white opposition to civil rights as well as using it as a forum for subjects relating to black social, cultural and artistic life.

Through the NAACP’s magazine he articulated his interest in Pan-Africanism, a growing intellectual and political  thrust dealing with the condition of people of African descent in the US and other countries. He traveled to Europe for Pan-African conferences. In 1921 he promoted resolutions which insisted on global racial equality and that African nations be ruled by Africans. He and Marcus Garvey, who wanted to establish a shipping company to transport African- Americans back to Africa, divided over the plan because DuBois saw it as a new form of racial segregation. By the mid-20th century he became more radical in his thought. He did not approve of US involvement in war with Japan during WWII (and later the Korean War) which he saw as a way for whites to control Asia after the war. Eventually he supported Socialism as a better way for people of color to gain economic and political equality. In 1961, DuBois traveled to Ghana at the invitation of President Nkrumah to take up residency and begin work on the Encyclopedia Africana. His health declined during his two years in Ghana and died at the age of 95 on August 27, 1963, the day before Dr Martin Luther King’s I Have a Dream speech at the March on Washington at which a moment of silence was held in DuBois’ memory..