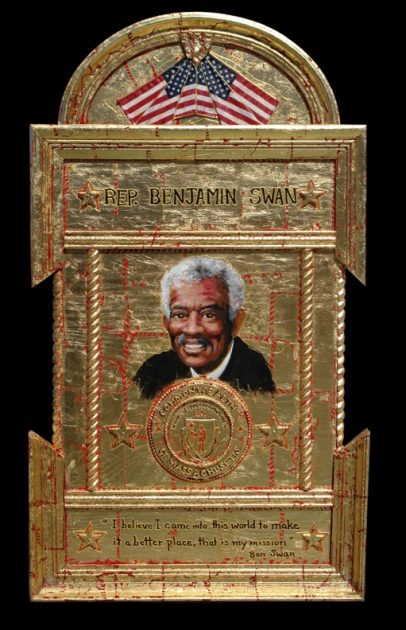 The icon honoring Ben Swan has been purchased and acquired by the Springfield Museum of Art, Springfield Mass.

This icon was commissioned in 2014 by Trinity United Methodist Church in collaboration with The Forest Park Middle School Springfield, Mass.

Benjamin Swan has dedicated his life to serving his community and the cause of social justice. From  leadership in the Civil Rights Movement, to his role as an elected representative in the Massachusetts state legislature, he has faithfully served the people of the Springfield area for 50 years.

Ben Swan was born in Belzone, Mississippi, the eleventh child of George and Sallie Johnson Swan. With his family, he migrated to Springfield in 1950 and graduated from the former Technical High School in 1952.  The family’s deep spiritual roots, its appreciation for education and commitment to public service were instilled into Ben and his siblings at an early age.  He attended Howard University, Marquette University, and American International College, with an MEd and a DEd from the University of Massachusetts/Amherst. He also holds a BFA from Fashion Art School.

It is not his formal education, however, which makes him an “Icon” of  civil rights within the Springfield community, but for the variety of ways he has fought for and acted on behalf of  the rights and welfare of all its citizens. As early as the 1960’s he served in several roles with the Springfield branch of the NAACP. In 1963 he was the Western Massachusetts coordinator of the March on Washington for Jobs and Freedom. Later that year he organized the Springfield chapter of the Congress of Racial Equality. As a formidable civil rights activist, Swan helped to organize and lead the 1965 protest against police brutality which grew out of  the Octagon Lounge incident in the Winchester Square neighborhood of Springfield. He marched with Dr. Martin Luther King, Jr. in Selma in 1965. He ran for mayor of Springfield twice and in 1994 was elected to the Great and General Court of the Commonwealth of Massachusetts from the 11th Hampden District (Springfield) and has been re-elected to the State Legislature ten times. Currently he is the only African-American serving in the legislature from the western part of the state.

As a state legislator, Rep. Swan serves in leadership positions on several key committees and is known for such legislative priorities as economic development, housing, health care, police-community relations and inmates within the state prison system. Youth education and development are among his  greatest concerns. Through his legislation, a youth development center was created in Springfield as a vehicle to reduce youth involvement in the criminal justice system. More recently he argued in the legislature against new and more stringent voter ID laws, equating the proposals to the Jim Crow rules in the South. He spoke about his efforts in Alabama during the Civil Rights era to help black people take tests given by Southern poll workers used to prevent them from voting. “Here we are…trying to slide in voter identification…something that is clearly designed to take away the rights of poor people, people of color.”  “It makes my heart weep,” he continued, “that here in the Commonwealth of Massachusetts there would be people in my home state who would want to take away those rights.”

For many years, Ben Swan has been the host of “The Black Love Experience”, a radio talk-show on WTCC (Springfield Community Technical College) which focuses on historical perspectives and public affairs. He is the recipient of numerous awards and citations for his community service, among them the WGBH-TV “Eyes on the Prize” award in 1988 and the NAACP James F. Hennessy Medal in 1993. He is also a member of Prince Hall Masonry and the National Black Caucus of State Legislators. He is also a US Army veteran of the Korean War.

Ben is married and the father of five sons and three daughters. He has an extended family living in the Springfield area, many of whom are active in community affairs.