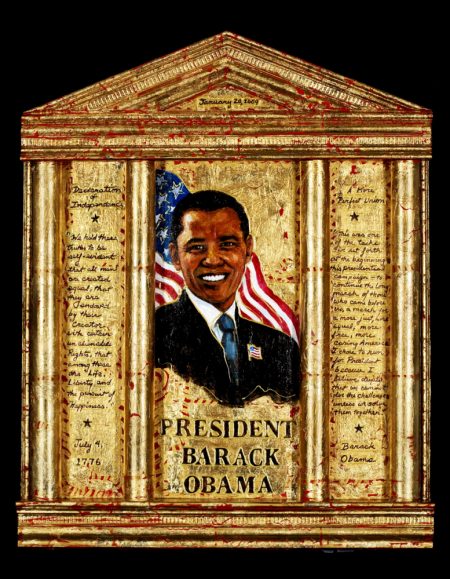 On November 4, 2008, Barack Obama was elected President of the United States. He is the 1st African American to hold the office of President. Only 2 years old when Martin Luther King delivered his “I Have a Dream” speech, Obama recognized

“I stand on the shoulders of the Civil Rights Movement”. It has been noted that “Rosa sat, so Martin could walk; Martin walked, so that Barack could run….”

President Obama was born on August 4, 1961 in Honolulu, Hawaii to a white mother from Kansas and an African father from Kenya. Students at the University of Hawaii, Ann Dunham married Barack Obama, Sr. They separated when Barack was 2 years old. His father returned to Kenya; in 1982, he died in an automobile accident. His mother later married an Indonesian. The family moved to Jakarta where Barack attended school until he was 10 years old. He returned to Hawaii and was raised by his maternal grand-parents. His mother worked in Indonesia as an anthropologist. She returned to Hawaii in 1994 and died a year later of cancer.

Following high school, Barack studied at Occidental College in Los Angeles; he transferred to Columbia University in New York City, graduating in 1983. He worked in NYC until, in 1985, he became director of the Developing Communities Project, a church based community organization on the South Side of Chicago. In 1988, he traveled to Europe and Africa where, in Kenya, he met relatives from his father’s family. He entered Harvard Law School and was the 1stblack person to be chosen president of the prestigious Harvard Law Review.

From 1997 to 2004, Obama served in the Illinois Senate. In 2004, he was elected to the U.S Senate from Illinois. He gained national political prominence when he delivered an eloquent keynote address to the Democratic National Convention in July 2004. He authored 2 books which related his personal story to his political philosophy: Dreams From My Father and The Audacity of Hope. In February 2007, at age 45, from the steps of the building where Abraham Lincoln served in the Illinois legislature, Obama announced his candidacy for president. Invoking the spirit of Lincoln, he said “…beneath all the differences of race and region, faith and station, we are one people…there is a power in hope…”

On the night of his election, Obama’s speech echoed the words of Dr. King: “Tonight is the answer……..of what we can achieve when we put our hands on the arc of history and bend it once more toward the hope of a better day….”