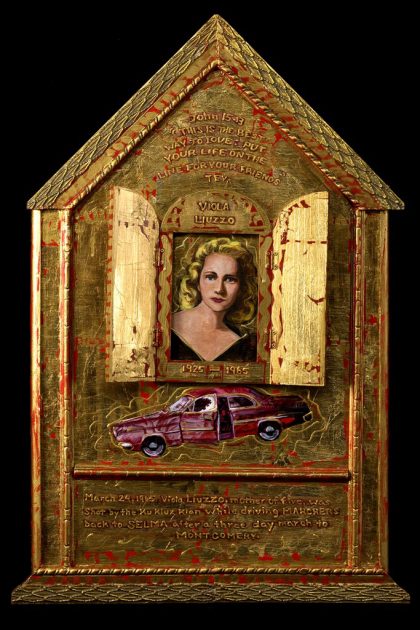 By all accounts, Viola Liuzzo was an extraordinary woman. At age 36, with 5 children at home, she went back to school to become a medical lab technician, graduating with top honors. But she only worked for a few months at her new profession, quitting in protest over the treatment of female secretaries. With the encouragement of her friend and housekeeper, Mrs. Liuzzo became one of the few white members of the Detroit chapter of the NAACP.

On March 7, 1965, she was at home with her husband watching the 11:00 news on TV where they saw some of the first film clips of the state troopers attacking the Selma marchers on the Edmund Pettus Bridge. She was upset for days following the brutal attack on the peaceful protesters on what came to be called “Bloody Sunday”. When news broke a few days later of the murder of a clergyman, James Reeb, in Selma, she got in her car and headed to Selma alone.

In Selma, she used her car to shuttle marchers back and forth between Montgomery and Selma. When she first arrived in Selma, she was a stranger to the organizers of the March, but she became known as a tireless and cheerful worker. “Her energy, enthusiasm and compassion were contagious and put many of us to shame,” commented a priest from Chicago who had been on the March. With the strains of “We Shall Overcome” still in her ears, she left Selma to head back to Montgomery to pick up another carload of marchers. Riding in the Oldsmobile with her, and to assist her in the late night drive, was LeRoy Moton, a young black man.

About 20 miles out of Selma, on a lonely stretch of highway, she was followed by a carload of Klansmen. They had spotted her Olds with a Michigan plate and a black man in the car. They sped upwards of 100 miles an hour to catch up to her car.Finally, the Klan was able to pull up alongside, and one of the Klansmen, who sat in the back seat with his arm out of the window, fired his pistol twice. The bullets crushed her skull.The car careened off the road and ended in a ditch. Moton was not hurt but was so covered in blood that the Klan left him for dead.

Mrs. Liuzzo was chased, shot and murdered in her own car; an FBI informant was in the Klan car at the time. President Lyndon Johnson was so outraged by her death that he ordered a full scale investigation of the KKK which uncovered a series of Klan crimes and eventually led to a curtailment of Klan violence. In spite of the evidence against them, the Klansmen were found not guilty of her murder by a local jury. In an unusual move, the U.S. Justice Department brought federal charges against the 3 Klansmen and eventually they were convicted.