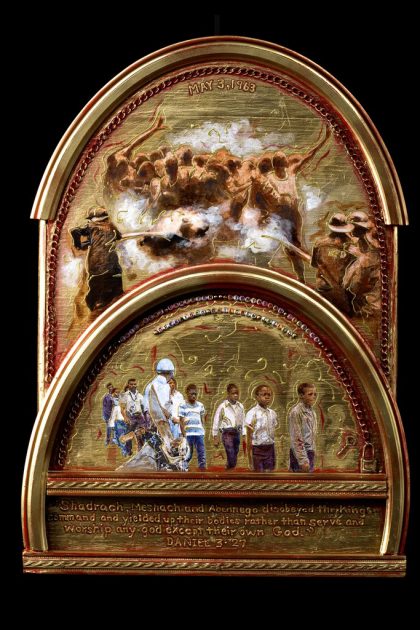 The Children’s Campaign was the voluntary involvement of children in civil rights demonstrations in Birmingham. Thousands of young people marched, were arrested, attacked by police dogs and tortured with water hoses.

Birmingham, Alabama was one of the largest and most rigidly segregated cities in the South. Efforts to end segregation had been met with harsh resistance from the white community. In fact, Birmingham had been nicknamed “Bombingham” for the way in which the homes, businesses and churches of black leaders were blown up. The Police Commissioner gained the name “Bull” Connor for his use of the police to intimidate the city’s black population.

Martin Luther King, Jr. was arrested in Birmingham on April 12, 1963. It was from his prison cell that he wrote “Letter from a Birmingham Jail”. The letter was a call to his moderate clergy colleagues to become more directly involved in the struggle for justice. King and his associate, Ralph Abernathy, were released from jail when their $50,000 bail was raised by the singer, Harry Belafonte.

Shortly after, at an evening rally, Dr. King asked who would be willing to demonstrate with him the next day and risk going to jail if necessary. In response, and to the surprise of the adults sitting in the room, a group of children and teens stood up. Not taking their response seriously, King thanked them and asked them to be seated. But they were serious and refused to sit. The adults urged against the children’s involvement in the protest marches. But another of King’s associates, James Bevel, argued in favor: “Are they too young to go to segregated schools? Are they too young to be kept out of amusement parks? Are they too young to be refused a hamburger in a restaurant?” “No,” came the response. “Then they are not too young to want their freedom!” That night it was decided that any child old enough to join a church was old enough to march.

On May 2, there were over 1000 children, teens and college students who showed up for the protest march. They were arrested in such large numbers that, after the jails were filled, the nearby county fair grounds were used to imprison them. The next day, even more children, now joined by adults, showed up for the demonstrations. “Bull” Connor, unable to stop the “Children’s Campaign” by intimidation through imprisonment, now turned high powered water hoses on them; he set loose police dogs to attack them. Once again, the nation watched TV in horror as the youngsters were bitten by the police dogs and tossed to the ground by hoses that would tear the bark off trees.

As a result of the “Children’s Campaign” the city leadership and the civil rights demonstrators made an agreement to desegregate the city.