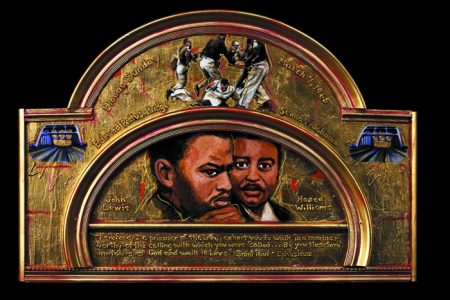 On March 7, 1965, about 600 people gathered in Selma, Alabama to begin a 54 mile walk to the state capital of Montgomery. They were demonstrating for equal voting rights. In Selma, over half the population was African American yet they comprised only 2% of the registered voters because of a systematic effort by whites to intimidate and prevent blacks from voting.The marchers were also memorializing Jimmie Lee Jackson who had been killed three weeks earlier by a state trooper while trying to protect his mother at a civil rights demonstration.

As the group reached the other side of the Edmund Pettus Bridge from Selma, they found the road blocked by State Troopers. The organizers of the march, John Lewis and Hosea Williams, had instructed the marchers in the philosophy and practice of non- violence and so had implored them not to fight back against any violence toward them. The sheriff told the demonstrators that they were not permitted to continue their march and they were given 2 minutes to disperse. Before they had a chance, the troopers attacked with teargas and clubs; some were trampled and spat upon. Many, children and adults, were injured; both John Lewis and Hosea Williams received serious head wounds from being beaten by troopers.

Because reporters and television photographers were present, the evening’s television news carried pictures of the peaceful demonstrators being viciously attacked by well-armed state troopers. The event became known as “Bloody Sunday”. As a result, Martin Luther King came to Selma and assisted in organizing a 2nd march which was to take place 2 days later. But again, as the marchers reached the other side of the Bridge, they too were told to disperse, but this time without the violence of the previous Sunday. This was called “Turn Around Tuesday.” King had sent out word that clergy and other religious people should come to Selma to add moral authority to the demonstration. Allowing CBS footage of the events of “Bloody Sunday” as evidence, on March 17, a federal judge ruled in favor of the march and the demonstrators began again over the Edmund Pettus Bridge, this time under the protection of the National Guard. By the time they reached the steps of the Capitol building in Montgomery on March 21, Lewis, Williams and King had been joined by 25,000 others.

John Lewis was a leader in the Student Non-Violent Coordinating Committee (SNCC), a group dedicated to ending segregation and registering black voters; he was 25 years old when he helped organize the march out of Selma. Rev. Hosea Williams, the other chief organizer, was a clergyman and a well known civil rights activist. Lewis would later be elected to the US House of Representatives from Atlanta and has been re-elected 9 times, still serving in Congress; Rev. Williams, famous for his motto “un-bought and un-bossed”, focused his work on voting rights and feeding programs for the poor. He died in 2000 at the age of 74.