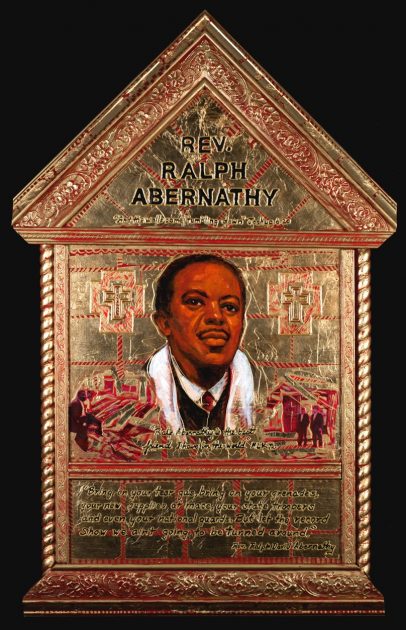 Ralph David Abernathy and Martin Luther King, Jr. were co-workers and friends. They first met in Atlanta while still in school and formed a partnership in the struggle for Civil Rights. Between 1955 until King’s death on April 4, 1968, they shared hotel rooms and jail cells, walked side by side in demonstrations and marches and even spent leisure time together with their families. In a speech to the sanitation workers in Memphis, King said, “Ralph David Abernathy is the best friend I have in the world.” The next afternoon, King died in Abernathy’s arms after King was gunned down on the balcony of the Lorraine Motel.

Abernathy was born in Lindon, Alabama on March 21st, 1926. His grandfather had been a slave and is reputed to have been the first black man to vote in Marengo County. His father, a farmer, told him, “The bottom rail will come to the top one day and justice will not be denied to the colored man.” Abernathy served as a Sergeant in the U.S. Army during World War II. In 1948, he was ordained a minister in the Baptist Church. He earned a Master’s degree in Sociology at Atlanta University before becoming the pastor of the First Baptist Church in Montgomery, Alabama in 1951. On December 1, 1955, Rosa Parks was arrested for not giving up her seat to a white man on a Montgomery city bus. As an officer in the NAACP, Abernathy called the first mass meeting of the Montgomery Bus Boycott. He worked with Dr. King to organize that boycott in which blacks refused to ride the buses until they were integrated. The boycott lasted 382 days. As it drew to a successful conclusion, Abernathy’s church and home were simultaneously bombed. Fortunately, his wife and daughter were unharmed, but both buildings were severely damaged.

With others Abernathy and King created the Southern Christian Leadership Conference. King was President; Abernathy was Secretary-Treasurer and assumed the presidency after King’s death. The SCLC was committed to using non-violence in the struggle for civil rights. During the height of the Movement, Abernathy endured continual threats upon his life and beatings by police, not to mention the slaying of civil rights workers during the March from Selma to Montgomery which he helped to organize. He was arrested in non-violent protests 44 times. His family’s land and his car were confiscated as punishment for protesting unjust laws.

After Dr. King’s death in Memphis, Abernathy directed the Poor People’s March on Washington in May, 1968; he helped to organize the sanitation workers strike in Atlanta that same year as well as the Charleston hospital workers’ strike in 1969.

Ralph Abernathy died on April 17, 1990 in Atlanta, Georgia of natural causes The title of his autobiography, And the Walls Came Tumbling Down, referred to the prayerful, non-violent way in which the walls of Jericho fell after Joshua listened to God’s command. The book is his final accounting of his friendship and partnership with Dr. Martin Luther King, Jr. and their commitment to the cause of justice.